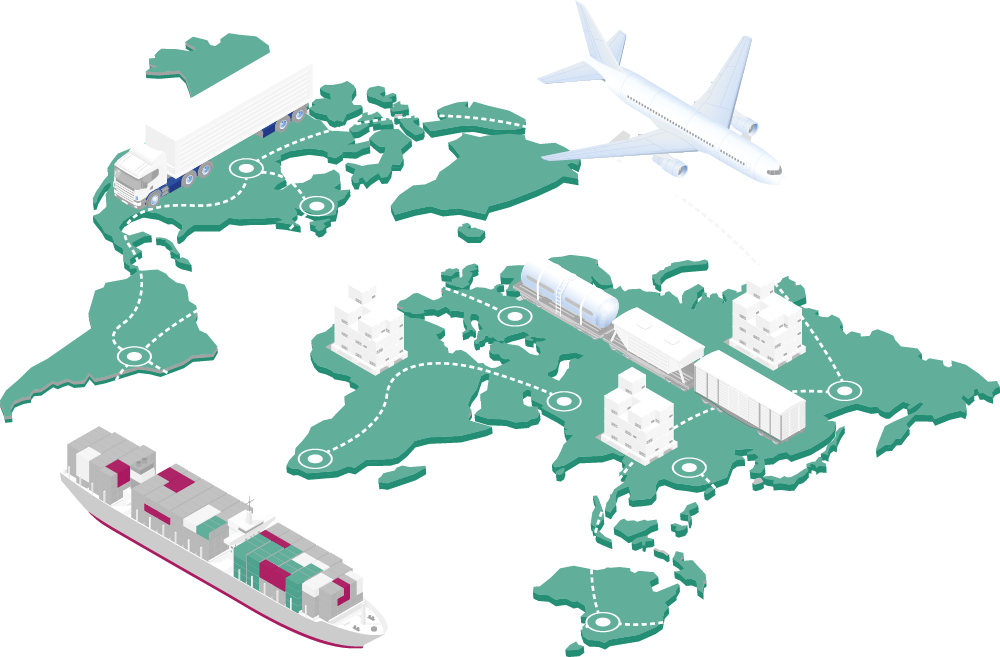 Supply Chain Act comes into effect in 2023 in Germany

The new supply chain act “LkSG” is adding a new dimension of complexity to companies’ compliance management in Germany. Feasible screenings and risk assessments are still largely unstructured and very time-consuming and cost-intensive.

CHECK YOUR SUPPLY CHAIN. IN REALTIME.

Comply with central requirements of the LkSG law with our solution that 24/7 screens the news and automatically evaluates all relevant risks along your supply chain. Saving you valuable time, money and a lot of paperwork.

Get your free demo now 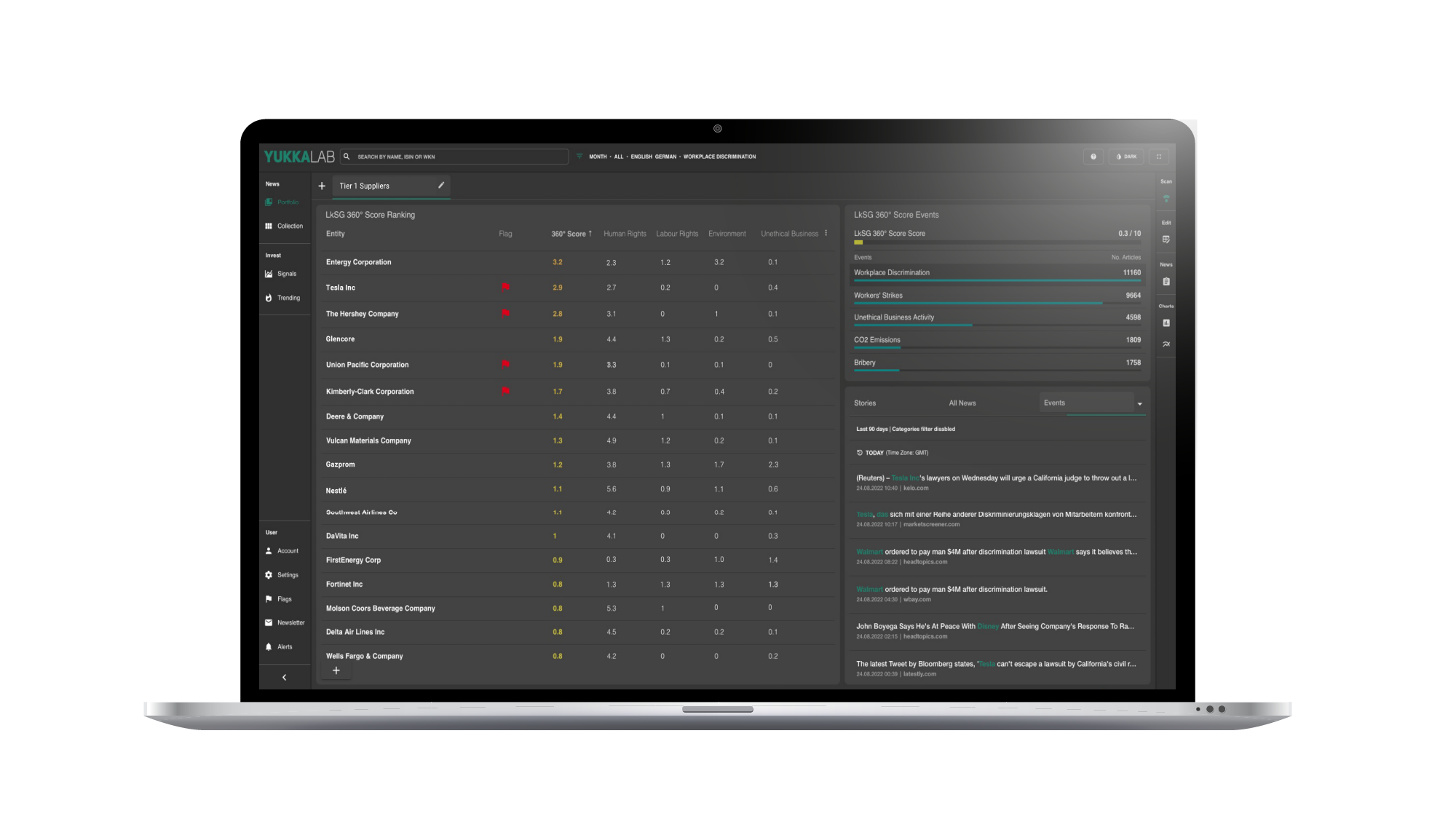 you can call me Lieferketten­sorgfalts­pflicht­gesetz

Starting 2023, the Lieferkettensorgfaltspflichtgesetz, short LkSG, will come into effect, enforcing companies to conduct a mandatory, periodical Due Diligence of their Supply Chain. The focus lies on violations of international human rights conventions and environmental law.

FINES UP TO 2 % OF YEARLY TURNOVER

Fines for companies not complying with the new legislation can go up to two percent of their yearly turnover. Furthermore, violations threaten the public image of organizations and are not chime in with CSR.

In 2023 the act will only affect companies located in Germany with over 3000 employees. This threshold will be lowered to 1000 employees in 2024.

CUSTOM SCREENING OF YOUR SUPPLY PARTNERS

based on cutting-edge AI and machine learning

More about our technology 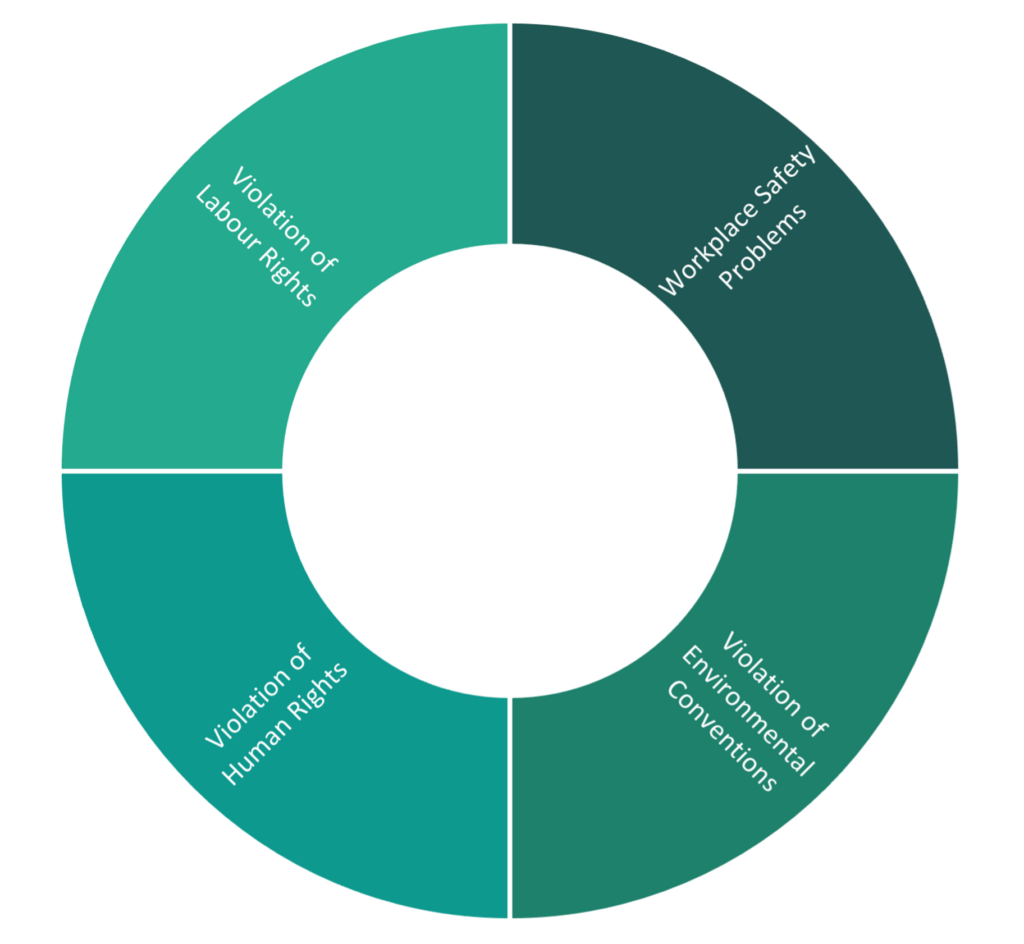 Labor rights or workers’ rights are both legal rights and human rights relating to labor relations between workers and employers. These rights are codified in national and international labor and employment law.

Human rights are moral principles or norms for certain standards of human behaviour and are regularly protected in municipal and international law. They are commonly understood as inalienable, fundamental rights “to which a person is inherently entitled simply because she or he is a human being” and which are “inherent in all human beings”, regardless of their age, ethnic origin, location, language, religion, ethnicity, or any other status.

They are applicable everywhere and at every time in the sense of being universal, and they are egalitarian in the sense of being the same for everyone. They are regarded as requiring empathy and the rule of law and imposing an obligation on persons to respect the human rights of others, and it is generally considered that they should not be taken away except as a result of due process based on specific circumstances.

UNECE has negotiated five environmental conventions, also known as multilateral environmental agreements or MEAs, all of which are now in force.

The governing bodies of the UNECE MEAs are serviced by the UNECE secretariat, which also helps them to monitor the implementation of the treaties. While many of the UNECE environmental conventions started as regional instruments, a number of them have become or are in the process of going global, and the work under these MEAs has for a long time included States outside the UNECE region in their activities. This trend underscores the impact of the UNECE MEAs, which have transformed the legal and natural landscape in our region and beyond.

Globally, more than 2.78 million people die annually as a result of workplace-related accidents or diseases, corresponding to one death every fifteen seconds. There are an additional 374 million non-fatal work-related injuries annually. It is estimated that the economic burden of occupational-related injury and death is nearly four per cent of the global gross domestic product each year. The human cost of this adversity is enormous.

In common-law jurisdictions, employers have the common law duty  to take reasonable care of the safety of their employees. Statute law may, in addition, impose other general duties, introduce specific duties, and create government bodies with powers to regulate occupational safety issues: details of this vary from jurisdiction to jurisdiction.

SEE HOW YOUR PARTNERS SCORE IN EACH DIMENSION

The severity of violations differs, so we identify Red Flag events. If a company is linked to modern slavery, for example, YUKKA instantly notifies you so actions can be taken immediately.

this is how it works

Upload the Details of your Tier 1 suppliers to our application

Your time is valuable. We send you alerts as soon as we detect red flags so you can react immediately based on our LkSG scores

Structure is key to management. With our tool, you can prioritize cases and initiate processes.

Get Ready for LKSG.

get your free demo now 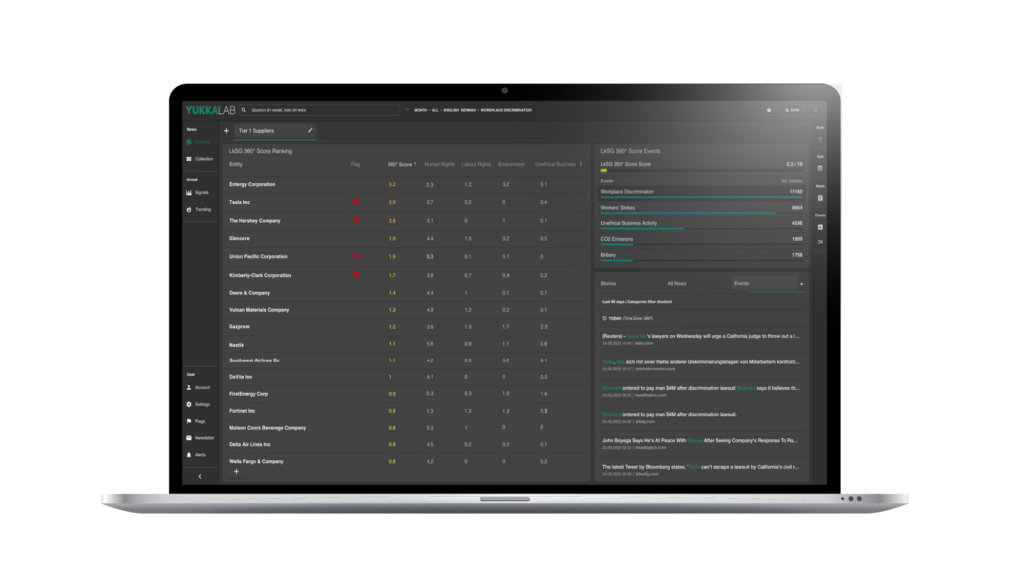 CHECK OUT OUR OTHER YUKKA LAB ANALYTICS SOLUTIONS: