News & Trend Lab insights: How Brexit might take UK aviation back to 1913 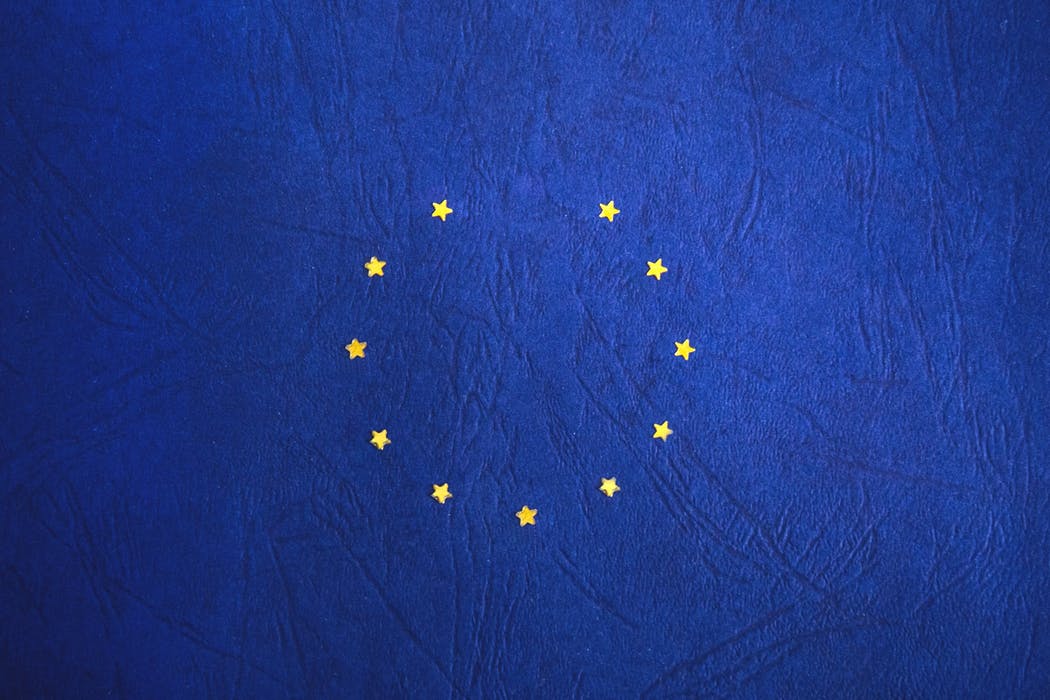 12 Mar News & Trend Lab insights: How Brexit might take UK aviation back to 1913

News around the all so famous Brexit term have been picking up the pace again, as advisory papers for British companies and inhabitants have been released, discussing how to best prepare for a no-deal Brexit. This paper release has been one of the few occasions in the last weeks where proper consequences have been discussed and revealed, opposed to the usual, more general point of saying “Brexit will have a negative impact on the economy”.
One major industry affected by this no-deal Brexit would be the one of aviation. This has undoubtedly been identified already as a problem when the general public approved the idea of Great Britain leaving the European Union. Up until now though no alternatives have been publicly announced nor talked about by the British government as its detailed impacts only have been released in the latest advisory paper.
If a no-deal Brexit were set into place, this would mean that flights, of UK carriers, between the UK and the EU would be grounded indefinitely as the “US-EU Open Skies Agreement” would no longer include the UK. Pilot licenses would also first need to be renegotiated before international flights could lift off once again.
This scenario poses problems as companies are already selling tickets for the post Brexit time (planned for after 29th March 2019), even though there is no such possibility of fulfilling them in the current Brexit plan. The paper released in late September shows that there is currently no alternative to prevent such a scenario which especially inflicts UK based or operated airlines such as EasyJet, Thomas Cook, and Ryanair.
This blog post should give a preliminary analysis and summary on what the fate of those three key players looks like based on market sentiments and how it may or may not change going forward.

The sentiment indicators show a clear and unanimous downward trend. All three companies saw huge sentiment drops of 20% and more happening, some of which happened quite instantly instead than over a prolonged period. Overall none of the sentiments was able to recover as shown in the below example sentiment charts which explains the seriousness of the problem. When we look at the charts, it also becomes evident that sentiment scores are very low with 33% for EasyJet (Illustration 1), 28% for Thomas Cook (Illustration 2) and 9% for Ryanair (Illustration 3) which again shows how badly this industry is hurt in the United Kingdom.

Illustration 1: the 30-day sentiment of EasyJet 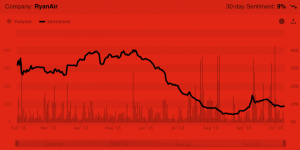 Illustration 3: the 30-day sentiment of Ryanair

This negative change in market sentiment over such a long time can be traced back to a big event in the business environment, as other short-term effects like strikes or flight cancellations due to weather would not have had such an impact over that long period. This long-term event can be traced back to the impacts of Brexit negotiations. In detail, this can be caused by insecurities regarding the extent of the implications of a no-deal Brexit which explains the steady decrease in the market sentiment of Thomas Cook and Ryanair. This is caused by both investors and customers noting the ever so slowly approaching Brexit date without any clear-cut solutions to the problems that come with it.

When we compare these market sentiments to the one of the United Kingdom (Illustration 4), we can see why the British airline industry was identified as a very vulnerable one when it comes to the consequences of Brexit. As we already discovered, all of the identified key players have dropped in sentiment continuously while the overall sentiment of the United Kingdom has more or less stayed level over the same period. This shows that news sentiment from the YUKKA Lab News Lab cannot only be used as a short-term stock price predictor but also as an industry and company identifier when it comes to identifying impacted industries affected by long-term events and its uncertainties. This makes it especially interesting for research institutes as well as long-term investors to compare events and its impacts on different sectors.

As usual, the YUKKA Lab sentiment score is also a great indicator of what to expect in the future. From what we see based on the sentiment score we can say that there is no clear sign for a change in sentiment. Sentiment for all three companies are very low and look like they will continue to drop which will resemble itself in the share price as well. Taking a deeper look into the news sources found in the cockpit, we can also clearly derive that media sources and analysts share the doubts of the British government finding an acceptable solution before March 29th. This is due to new regulations usually taking a long time to get approved, especially as it has to be made with and approved by several different countries. This means that even if a solution for the mentioned problem is suggested, sentiment will most likely recover in the short-term but will stay rather unchanged in the long-term. As of right now, the only solution to this problem which will certainly lift the sentiment score of British airline companies over the 50% mark is the certainty of a mild Brexit where the United Kingdom can rest assured that they will remain a part of the US-EU Open Skies Agreement.

—-
This story was provided by Valentin Back, Research Assistant for Finance & Analytics at YUKKA Lab and Student at Warwick Business School.